We know how important a healthy gut is for our overall health, but could the tiny bacteria in our gut influence our athletic performance and recovery? If so, might it be possible to modify our populations of friendly microbes in order to improve an athlete’s performance?

Clinical trials are being carried out in the hope of shedding some light on this subject, and there are a few important factors that need to be considered here. Firstly, is the gut bacteria of an athlete actually different to that of a non-athlete, and secondly, is that difference providing athletes with some kind of physiological or biological advantage?

Jonathan Scheiman, PhD wanted to explore whether the microbiome (the collective term for all the microbes inhabiting our gut) of an elite athlete could one day be replicated via the use of targeted probiotic supplements, and transferred to non-athletes. In his words he wondered: "Can you extract Michael Jordan’s biology and give it to others to help make the next Michael Jordan?"1.

As a first step towards identifying bacteria that might support athletic performance, Scheiman and his researchers collected faecal samples every day from 20 athletes that were training for the Boston marathon. They did this for two weeks, starting from a week before the race, and continuing until a week after the event had taken place. When they compared the pre-race and the post-race samples they found a sudden and dramatic spike in a population of one particular type of bacteria in the post-race samples.

The type of bacteria that rose in number was a certain strain that breaks down lactic acid (an acid that builds up in muscles during prolonged exercise leading to the dreaded muscle fatigue). Having isolated this bacteria, the researchers are now feeding it to mice to measure its effect on lactic acid levels, and therefore muscle fatigue, when transplanted in to a different ‘host’. Could the competitive advantage of having less lactic-acid build up during exercise really be taken from one host and transplanted in to another?

Scheiman and his team are also analysing the microbiome of ultra-marathon runners, and comparing it to that of athletes from short- burst, high-intensity activities such as rowing. What his team have found so far is that ultra-marathon runners possess a certain type of gut bacteria that helps to break down carbohydrates and fibre. This role could give a crucial ‘edge’ to long distance athletes, who need to sustain their energy from food over longer periods of exercise, and therefore often carb load before an event, including lots of wholegrain foods and slow-release carbohydrates in their diet. This same bacterium was not, however. found in the microbiome of the rowers, or athletes from other short-burst, high-intensity disciplines, who are less reliant on accessing all potential energy sources from their food.

Although there have been relatively few studies looking at the impact of gut health on athletic performance to date, those few that have been done often conclude that athletes have greater diversity of microbes in the gut than non-athletes.

Scientists in Ireland published a pair of papers on the microbiomes of professional Irish rugby players. The first study showed increased diversity of gut microbes in the athletes, and lower levels of one type of bacteria (Bacteroidetes) and higher levels of another (Akkermansia). The second study then focused on the functional impacts of these differences in gut microflora, and whether they led to a sporting advantage for the athletes.2

Orla O’Sullivan, the lead researcher, could not say for certain what the cause for the observed increase in bacterial diversity was, but she said that possible factors include the amount of protein eaten by the athletes as opposed to the control participants, or levels of a certain enzyme in the blood of the athletes (for example, the enzyme creatine kinase is involved in muscle repair, and is often very high in elite athletes). Whilst not being able to pinpoint the specific cause of the microbial differences between athletes and non-athletes, O'Sullivan does hypothesise that:

"It’s an adaptation to a lifetime of training that’s having the effect...the diet definitely has a huge role to play as well."

This implies that the microbiome changes over time as a direct result of athletic training, and also the kind of diet that supports such training levels, rather than some people simply having a microbiome that naturally gives them an athletic ‘advantage. This is good news for all of us mere mortals! Knowing that you don’t have to be ‘born with it’ after all, and that you can in fact influence these specific bacteria that bring about (likely) athletic advantages, is a small comfort (although now we don't have any excuses for our decided lack of physical ability...).

Looking outside of an athlete's specific training needs, it is also important to consider more general health parameters that also impact on their performance and ability to train. Due to their long and strenuous training schedules, athletes are at a far greater risk of immune suppression than their less active counterparts.

Whilst a certain level of exercise is beneficial in supporting immunity, too much can be a stress to the immune system. During intense exercise we experience changes in the production of various antibodies (our bodies' 'soldiers', so to speak, which combat pathogens) and immune complexes (which are formed when our antibodies bind to pathogens), and as such the immune system can be negatively affected for up to 72 hours after each training session. This puts competitive athletes at a far greater risk of picking up bacterial and viral infections, which can be very costly to their training schedules and chances in competition.

Probiotics are well known to support immunity in a number of different ways. This includes providing an effective ‘barrier’ along the gut wall which helps to prevent pathogens from adhering to the gut lining and causing infection. In addition, certain strains of friendly bacteria,such as Lactobacillus paracasei CASEI 431®, have also been shown to increase the number of antibodies in clinical trials3, helping to support immune health. This strain can be found in OptiBac 'For daily immunity'. 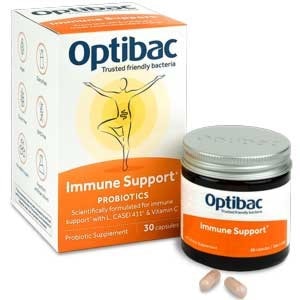 It may sound obvious to say that athletes (like all other people) need to look after their digestion, however due to their intense training regimens and competition schedules the demand on their bodies for nutrients is huge. During training a great deal of free radicals are created, which require additional anti-oxidant nutrients such as vitamins A, C and E to neutralise them. Probiotic bacteria, by improving overall digestion, may increase the amount of vital antioxidants that are absorbed from the diet, and tentative research suggests that they may even act as antioxidants themselves4. Maximising digestion and absorption of nutrients helps to ensure that an athletes nutrient requirements are met on a daily basis.

Additionally, the body of an athlete also has greater need for protein, as it aids in muscle recovery after intense exercise. However, we only have the ability to digest a finite amount of protein with each meal (usually around 25 grams, depending on the individual5), as protein is not stored in the body. In order to fully benefit from dietary protein it is essential that it is broken down. It is only then that it can be absorbed in the small intestines and put to use in the body. In a 2018 review6 of clinical trials looking at the influence of probiotics on protein digestion, Wang et al. concluded that probiotics have been shown to increase protein breakdown and absorption.

Research still needs to be done in order to identify specific strains of probiotic bacteria which could be useful to different sporting disciplines. Physiological requirements are different for short- and long-distance events, which means that the probiotics used would most likely need to be specific to sport or training type. Whilst this in-depth research is most likely some way off completion, we are excited to see where it leads and what it might mean for the future of sports. There's still some hope for us the less athletically-inclined of us yet!

FAQ: How might probiotics help me as an athlete?
Blog: Is there a link between our gut flora and cardiovascular fitness?

2. Orla O’Sullivan (2017) ‘The microbiome of professional athletes differs from that of sedentary subjects not only in composition but particularly at the functional metabolic level’ Gut http://dx.doi.org/10.1136/gutjnl-2016-313627