It is well known that certain maternal characteristics are passed onto the newborn, and new research supports the inclusion of bacteria passing from mother to newborn baby. Presented at the 7th International Yakult Symposium, the research was aimed at investigating the factors which influence infant gut flora. As you will see below, it was found that a mother’s intestinal microbiota can pass onto and colonise the digestive system of the newborn within the first few days of their life. Furthermore this bacteria is thought to play an important role in the development of their gut flora characteristics.

The Japanese research team investigated how an infant’s gut microbiota is influenced and established, by looking at a sample group of 111 women and their newborns. Of these, 89 infants were born vaginally and 29 were born by caesarean. The analysis was done by looking at the faecal (stool) samples taken from the mothers twice before birth and their infants five times after birth (between 0 and 90 days after they were born). The research team looked at the gut bacteria at the strain level as they thought it very important to ascertain whether the exact same strain of a probiotic could be tracked from the maternal intestine to the infants (and it could!). 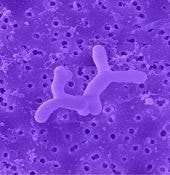 What is the importance of probiotic strains? Find out.

Interestingly, over 2,500 Bifidodobacterium species were identified and isolated from the faecal samples, with the ones most consistently identified being B. adolescentis, B. bifidum, B. catenulatum, B. longum subsp. lungum and B. pseudocatenulatum (try saying that five times fast!).

It was concluded from the results, that a mothers intestinal microbiotia, namely Bifidobacterium, do play an important role in the colonisation and development of an infant's gut flora. The research also highlights the importance of robust and balanced gut flora during pregnancy - as a mother's microbiota can seemingly have a significant influence on the development of healthy gut flora in newborns.

Here at Optibac Probiotics we believe that probiotics play a very important role in pregnancy, breastfeeding and childhood and our For babies & children is especially designed to be taken during these important life stages.

Want to find out more about how a baby's gut bacteria can influence their health? Have a look at these interesting research stories; colic and gut bacteria and Bifidobacteria & breastmilk.