Do probiotics help with eczema?

In today’s world, eczema is a very common and unpleasant complaint. The gut microbiome has become increasingly recognised for its role in inflammatory and immune-mediated conditions, including eczema. Dysbiosis has been identified in many of those who suffer with eczema1. Modifying the gut microbiome with probiotics is a growing area of interest to help manage symptoms. Read more about this on the Probiotics Learning Lab: What are Probiotics?

This article looks at the different types of eczema, and the way in which probiotics might help as part of a management protocol: 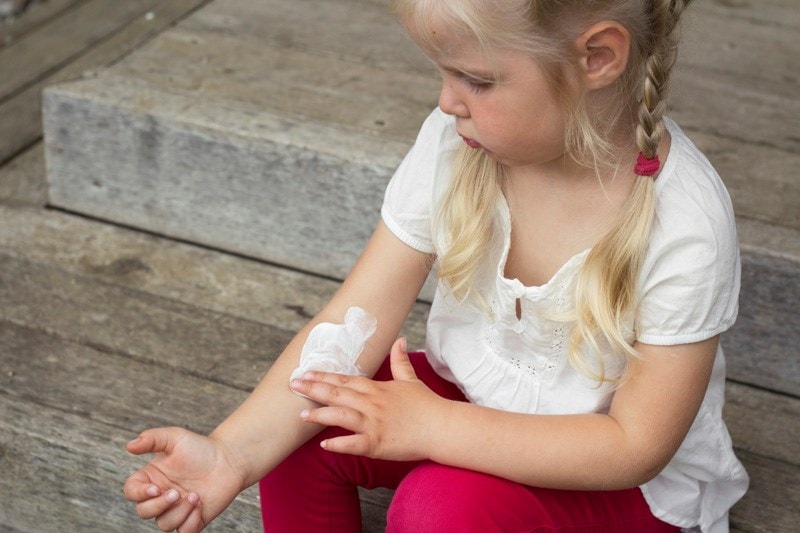 The term eczema refers to a group of inflammatory skin conditions. There are many different types of eczema, categorised based on the underlying cause and skin location affected2. The lifetime prevalence of eczema is reported to be 28% of the population, but it is most common in children. Up to 20% of children are affected3, with 60% of cases developing before the age of one year. For most individuals, it resolves in adolescence. There is often a predisposition for the development of other atopic diseases such as asthma and allergic rhinitis, known as the “atopic march”3. Read more about recent clinical research behind probiotics for asthma.

In adults, an average of only 38% reported having eczema in childhood which makes adult onset eczema much more prevalent than once thought4. Those with adult onset eczema are less likely to have a family history of asthma or allergies; risk factors include a history of smoking and female gender.

The most common subtypes include the following:

What is atopic dermatitis?

The most common type of eczema is atopic dermatitis2.The majority of clinical research assessing the effects of probiotics on eczema is focused on atopic dermatitis. Atopic dermatitis is a chronic inflammatory skin disease where localised patches of skin are typically dry, scaly, red and itchy. It most often manifests for the first time in infancy but can develop for the first time in adulthood. In severe cases, the skin may become thickened and ooze. It may become infected and require antibiotics.

In infants it is typically localised to the face, nappy area, or extensor surfaces of joints such as knees and elbows. Later in life, it more commonly affects flexural surfaces – the back of the knees or inside the elbows. Itch is an intense symptom which leads to scratching and skin damage. Atopic dermatitis can have a significant negative impact on the quality of life of those who suffer – limiting activity and contributing to sleep loss5.  It can be exacerbated by many lifestyle factors including emotional distress, wool clothing, heat, dry or cold weather, sweating, bathing, and exercise6 but researchers are now also considering the impact of gut health.

Causes and Management of Atopic Dermatitis

Genetic and immunological factors contribute to the development of atopic dermatitis:

Genetic - A loss-of-function mutation of the gene encoding filaggrin, an important protein required for adequate skin barrier integrity, is implicated.

There is currently no cure for atopic dermatitis. However, in conventional medical management there are various options to keep symptoms under control. These include avoidance of known environmental triggers, topical emollients, topical or oral steroids to reduce inflammation, and topical and oral immunomodulators8.

The Role of the Gut Microbiome in Eczema

In early life, colonisation of the gut with microbes is fundamental for the development of a healthy immune system. These microbes activate and promote healthy development of the immature gut mucosal immune system. The hygiene hypothesis identifies an association between the increasing prevalence of atopic and allergic conditions and features of a typical Western lifestyle including highly sanitised environments and antibiotic exposure9. Infants are exposed to microbes in their environment less and less which can prevent adequate development of the immune system. An immature immune system is dominated by a T helper 2 cell immune response which is implicated in allergic and atopic diseases including atopic dermatitis. For more information about the gut microbiome in early life, read this article on how the infant gut develops.

How can probiotics help with eczema?

There are several ways in which probiotics may prove to be a useful addition to a supporting health protocol for eczema:

Maintaining a healthy gut microbiome while on antibiotics –Antibiotics are known to deplete our natural friendly bacteria populations. Interestingly, the use of antibiotics in the first 2 years of life has been associated with an increased risk of developing eczema10,11. Replenishing the gut microbiome with specific probiotic bacteria while taking an antibiotic is a worthwhile endeavour. To learn more, read this article about taking probiotics with antibiotics.

Correcting dysbiosis – Imbalance in the gut microbiome, with higher levels of harmful bacteria such as Clostridia and Staphylococcus aureus and reduced levels of beneficial Bifidobacteria, have been reported in those with eczema12. Altering the gut microbiome composition with probiotic supplementation may be helpful.

Maintenance of “barrier effect” in the gut - increased intestinal permeability or “leaky gut” has been linked with atopic dermatitis for many years14. In leaky gut, the gaps between epithelial cells of the gut wall lining, known as tight junctions, are enlarged. These gaps allow antigens, substances that prompt an immune response, to pass through the intestinal lining. Exposure of the antigen to the GALT (Gut Associated Lymphatic Tissue) in the mucosa15 stimulates an inflammatory response. This may contribute to the development of inflammatory conditions such as atopic dermatitis. The gut microbiome plays an important role in maintaining the integrity of tight junctions in the gut lining. Probiotics can positively contribute to this “barrier effect”. To learn more about this, read the following article: Could probiotics help with leaky gut?

Probiotics for the prevention of atopic dermatitis: specific probiotic strains have been shown to help prevent the development of eczema when used in early life7,16. Several clinical trials have been conducted assessing the effects of Lactobacillus rhamnosus HN001® on the development and severity of eczema17. In a gold standard trial of 298 women and their infants, administration of 6 billion CFU of L. rhamnosus HN001® to infants from birth to 6 months yielded a significant improvement in the lifetime prevalence of eczema evaluated until age 11 years (p=0.002) compared with placebo17.

In another gold standard trial by Schmidt et al, involving 285 infants with an average age of 10 months old, the preventative effects of a combination of 1 billion CFU of both Lactobacillus rhamnosus GG® and Bifidobacterium lactis BB12® daily were demonstrated. After 6 months, significantly more infants had developed eczema in the placebo group compared with the control group (p=0.036).

Probiotics for management of established atopic dermatitis - Various clinical trials have assessed different probiotic strains for their ability to help improve the symptoms and quality of life of those suffering with eczema. A recent systematic review evaluating the impact of probiotic supplementation upon symptoms of established eczema around the world showed an overall clinically significant reduction in eczema severity in the probiotic groups versus controls18. This research is promising, although of uncertain clinical significance due to the heterogeneity of clinical trials6,19.

Which probiotic strains have been researched for eczema?

When trying to support eczema symptoms, it is best to use strains which have been specifically researched for this condition and found to elicit positive effects:

In a gold standard trial, 31 infants under the age of 11 months with severe atopic dermatitis were randomised to receive 100 million CFU of M-16V® with prebiotics daily or placebo for 4 months20. At the end of the study, there was a significant decrease in eczema severity in both groups, but the improvement was more significant in the probiotic group (p<0.01). There was also a significant reduction in the Th2 to Th1 chemokine ratio (p<0.01) in the probiotic group compared with placebo, indicating a reduction in Th2 immune response.

In a gold standard trial in Denmark, 50 children with an average age of 18 months with atopic dermatitis were randomised into 3 groups. One group were given 10 billion CFU of B. lactis Bi-07, another group were given 10 billion CFU of L. acidophilus NCFM® and the third group were given a placebo for 8 weeks21. Although initially no significant improvement in eczema symptoms were noted, post hoc analysis delineated a significant improvement in SCORAD (a clinical tool used to assess eczema severity) in the B. lactis Bi-07 group (p=0.009) with no differences seen in the other groups.

In a double blind randomised controlled trial of 38 adults with moderate to severe atopic dermatitis, 19 participants were allocated to receive 2 billion CFU of  L. salivarius LS01 per day for 4 months and the others were given a placebo22. A significant improvement in the probiotic group was noted after 8 weeks in comparison with placebo (p<0.001). The presence of Staphylococcus was significantly reduced in the probiotic group compared with placebo (p<0.05). Although the probiotic group achieved better results than the placebo group, the results of the placebo group were also significantly improved from baseline. Further clinical testing is required to assess the effects of this strain.

Based on this research, health professionals may like to consider gut health as part of any supporting protocol for eczema.

To find out more about the role of the gut microbiome in our immune health, read the article Probiotics for Immunity on the Probiotic Professionals site.