There has been a huge level of interest in the ‘Gut Brain Axis’ (read more over in the Probiotics Learning Lab) recently, and the way that our gut can send messages to our brain, and vice versa. This two-way communication takes place via the central nervous system and the enteric nervous system, which controls the activity of the gut, and appears to be influenced by our resident gut microbiome (the name for the populations of bacteria and other micro-organisms that live in our intestines - see Probiotics Learning Lab for more glossary terms). It seems incredible that our gut microflora may be able to influence our mood, and what has been of particular interest to scientists is emerging evidence that certain strains of bacteria may be able to positively affect our mental state more than others.

“There is a now a great body of evidence that indicates that pathophysiological pathways involved in the pathogenesis of depression are influenced by disturbance in the equilibrium of the gut microbiota”. Kazemi A.,et al. (2018)

There has been some limited but encouraging research to date which has focused on trying to measure these effects, but these studies have typically been conducted using healthy volunteers; however, a recent study1 attempted to determine the effects of two bacterial strains, Lactobacillus acidophilus Rosell-52 and Bifidobacterium longum Rosell-175, and also prebiotics, on participants with major depressive disorder.

This is the first comparison study to compare the effects of live cultures against prebiotics in patients with depression. For the purposes of the trial, 110 patients who had been diagnosed with depression were split into three groups, and randomly assigned to receive either a combination of two bacterial strains (at a strength of 10 billion CFUs), a prebiotic supplement (galactooligosaccharide), or a placebo, for a period of eight weeks. An assessment of diet and exercise levels were also taken at the start of the trial, and serum tryptophan, branch chain amino acid and kynurenine levels were also measured.

A total of 81 patients completed the trial: 28 in the probiotic group, 27 in the prebiotic (see Probiotics Learning Lab) group, and 26 in the placebo group. Using Beck Depression Scores (BDI) as a measurement, the results showed that the live cultures supplement led to a significant improvement in mental health symptoms compared with placebo, but no such improvements were observed in those patients taking the prebiotics. In the live cultures group, there was also a significant decrease in the kynurenine/tryptophan ratio. Read on to find out more about the significance of this. 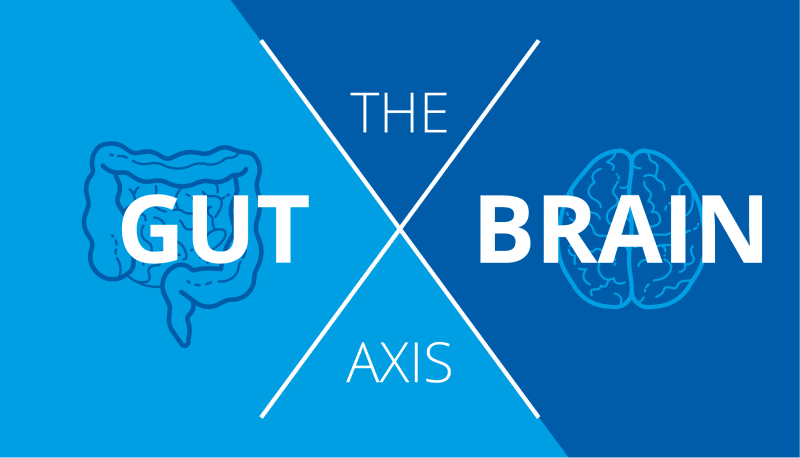 The study authors stated that one of the mechanisms by which the gut microbiome could affect mental health, would be by directly and indirectly influencing tryptophan metabolism. Tryptophan is an amino acid which is converted to the neurotransmitter serotonin. Serotonin is synthesised and found primarily in the enteric nervous system located in the gastrointestinal tract, where it helps to control bowel regularity and digestive function; however, it is also active in the brain where it is believed to be implicated in regulating our mood and sense of wellbeing. Low levels of this chemical have been associated with anxiety and depression. Whilst tryptophan is probably most well-known for being the precursor to serotonin, this amino acid can also be used to synthesise kynurenine.

The kynurenine pathway is receiving more attention from scientists due to its connection to immune responses and inflammation. It is believed that over activity in this pathway can result in inappropriate immune system activation and an excess of neurotoxic compounds, and this dysfunction is also associated with major depressive disorders2. If available tryptophan is utilised in the kynurenine pathway this appears to be to the detriment of serotonin production and may explain why major depressive disorders become more apparent in such cases. In this latest study, the beneficial gut bacteria were believed to drive the tryptophan to be utilised as part of the serotonin pathway rather that the kynurenine pathway, and it was this action which was thought to result in an improvement in the mood of participants.

Fascinating stuff! If you are interested in this area of research, then see these other related articles:

Could prebiotics help with anxiety?