Fermented foods - suddenly everywhere, and with good reason. If you are new to them, or want to know more, look no further! We are here to give you the lowdown, including our top picks of fermented foods and tips for getting more probiotic food into your diet.

What are fermented foods?

Fermented foods are foods that have undergone a fermentation process, a centuries-old method of food preservation, prolonging the expiry date of dairy products and vegetables before refrigeration was an option. Lots of the foods we consume today are fermented, meaning that they have been acted on by microbes, such as certain bacteria or yeasts. Bread, cheese, coffee and chocolate are some examples – however, not all of these contain the live cultures that are going to diversify your gut microbiota.

For probiotics in food we have to look to the likes of kefir, kombucha, kimchi and sauerkraut, to name a few. These traditional recipes involve the action of beneficial microbes to ferment the food substrate (or ingredient). In some instances the microbes will be already present in the ingredients used, such as the bacteria that live on the surface of cabbage leaves, used to make sauerkraut. In other recipes, such as kefir, the microbes need to be added, in the form of a 'starter culture'. The fermentation process starts to break down the food resulting in a nutrient rich end-product that’s easier to digest.

It’s understandable then that this practice, traditionally the preserve of Japanese, Korean and German cultures, is becoming increasingly popular in the UK. Fermented foods are a great thing for you to try making at home – good for you and good for your taste buds, and something you can easily create from scratch with surprisingly few ingredients. Other than that, a little bit of patience is the only requirement!

The primary benefit of fermented foods is that the lactic acid produced during the fermentation process helps to digest other foods, such as proteins. The vegetables are left to ferment for a period of days or weeks. Essentially they are pre-digested by bacteria and yeast which then helps with our absorption of their nutrients.

Fermentation also releases enzymes vital to the digestive process, which is one of the reasons that fermented foods are so beneficial to gut health. By improving gut health, many other systems in the body are positively affected. For example, our mental health and our immune health are intrinsically linked to gut health.

Read more about these topics: gut-brain connection and how our gut health affects our mood. Healthcare Professionals can head over to our sister site to read: Gut bacteria's role in immune function. 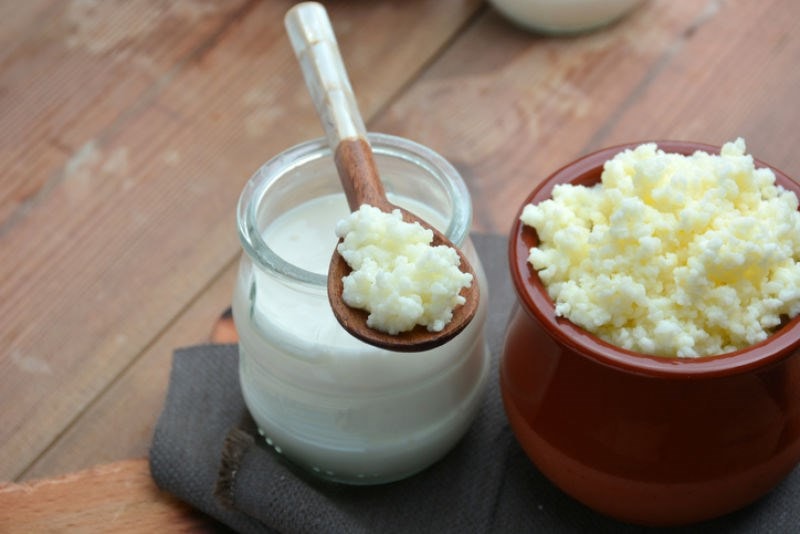 The name kefir is from the Turkish word 'keyif', which means 'good feeling'. A nutritious, cultured drink made of fermented milk, kefir has a refreshing flavour similar to a probiotic yoghurt. Kefir is the name of the grain that works as the product's starter culture, which is where all the yeast and good bacteria come from. The grains will ferment cow, goat and sheep milk as well as milk substitutes such as coconut, rice and soy. As a healthy replacement for 'ordinary' milk, even those who are lactose intolerant can enjoy homemade milk kefir. And for the dairy-free, look to plant- and water-based alternatives like those from Biomel and Purearth. 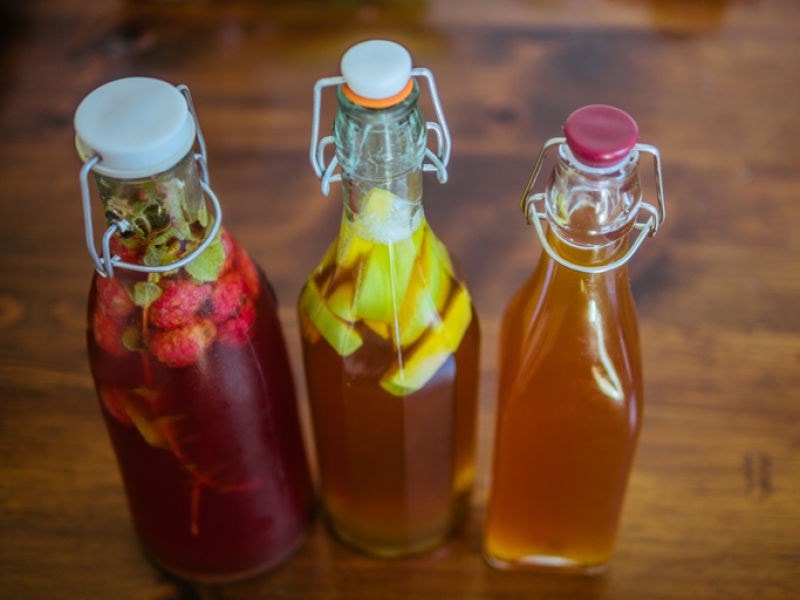 If you’ve been into a health food store recently you will have done well not to notice the proliferation of different types and flavours of kombucha! Why so popular? Well, kombucha is tangy, sparkling and refreshing, made as it is from fermented black or green tea, and flavoured with spices or fruit. Although sugar is used to support the fermentation process, a decent kombucha shouldn’t be sugary – and yes, you can make it at home! A relief for those trying to avoid the expense of a shop-bought bottle. But you will need a starter culture, otherwise known as a SCOBY (symbiotic culture of bacteria and yeast) - Equinox Kombucha and Happy Kombucha are great places to head for kits and recipes. 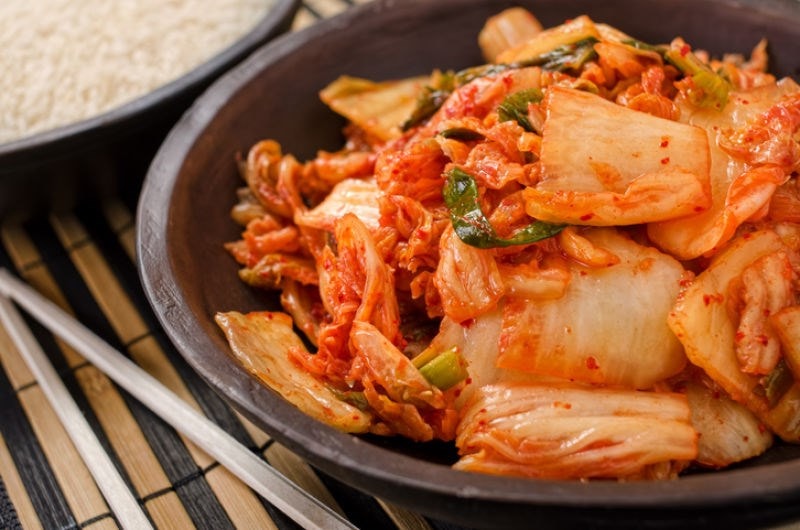 Kimchi is a staple dish in Korea. With an intensely flavoured cabbage as the main ingredient, it also includes a variety of fiery spices such as chili powder, as well as spring onion, garlic and ginger. It’s the Lactobacillus bacteria found on the surface of the cabbage that converts the sugar and carbs into lactic acid, preserving the vegetables and supplying the tang! 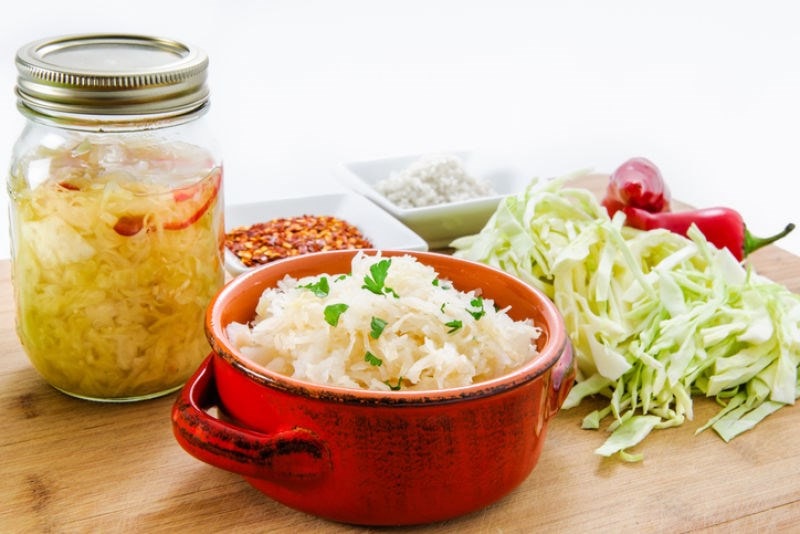 In its simplest form, sauerkraut is probably the easiest of all the fermented foods to make, requiring only two ingredients: cabbage and salt. Historically, in the UK, we’ve tended to pickle using vinegar, rather than brining vegetables using salt to preserve them. This is an important distinction because whilst the former doesn’t result in live cultures, the latter does. Sauerkraut is a fantastic combination of pre- and probiotics - friendly bacteria plus the food that nourishes its growth. And, as I say, probably the most straightforward of all the fermented food recipes. For inspiration, look no further than the Minimalist Baker for a fabulously coloured kraut – a great accompaniment to salads, wraps & sandwiches. Making it at home will mean it’s not pasteurised, unlike some shop-bought offerings. The pasteurisation process unfortunately destroys the beneficial bacteria.

Like kimchi, miso also originated in Japan, where miso means ‘fermented bean’. Although there are literally thousands of varieties of miso, it’s typically made from soybeans fermented with salt and koji, a type of fungus used as a starter culture. Miso is probably best known in the UK as a paste (often used for flavouring or seasoning) or diluted as a soup, sometimes served with soft tofu and seaweed.

If you want your paste to stay active (probiotic) ensure the stock or water isn’t boiling hot when combined. We love Miso Tasty for miso soup!

Fermented foods are great and should certainly feature as part of a healthy diet, as one way of introducing more live cultures into the body.

So, when it comes to finding a well researched strain of bacteria with a known and clinically proven associated human health benefit, a probiotic supplement, which can give these essential details, has its benefits.

If you're interested to learn more take a look at The Food Myth.