Anyone for baby poop sausages?

The humble sausage might never be considered a 'superfood', but a group of Spanish scientists think that they've found a way to make them much healthier: by adding bacteria cultured from baby poop. To many of you that might sound like the wurst idea, but actually the Pooperoni does make some sense. Let's look at the science.

We know that fermented foods containing live cultures have been around for millennia. Kefir, kimchi, sauerkraut, pickles, miso, tempeh and, of course, yoghurt have been eaten by humans for thousands of years and their health benefits are well recognised. Many sausages and cured meats, such as chorizo and salami, also undergo a bacterial transformation as the fermentation process adds their distinctive tangy flavour, chewy texture and intense red colour. 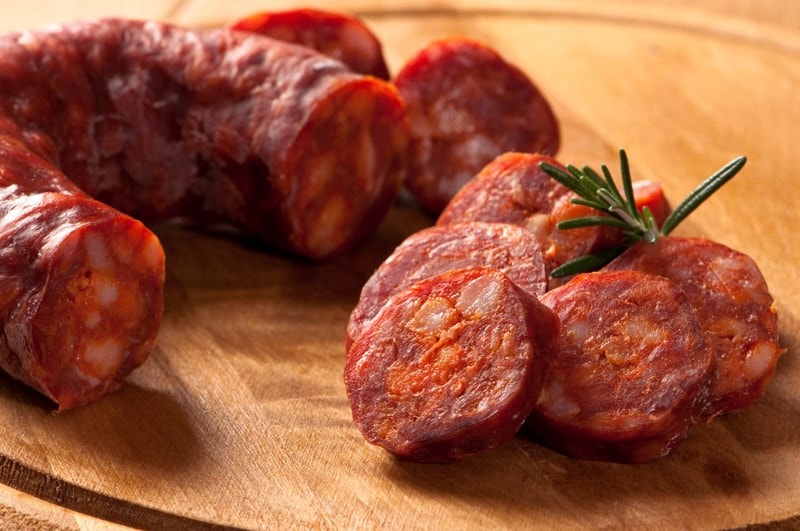 In any fermented food the bacteria play a vital role in keeping the food from spoiling. In cured meats the bacteria, found either naturally or added during the manufacturing process, produce lactic acid which, as the meat dries, inhibits the growth of pathogenic bacteria and keeps the meat edible.

Many fermented foods are known for their health benefits, and these are closely associated to the live cultures that they contain. One of the first discoveries of live cultures was made by the Russian scientist and Nobel Prize winner, Elie Metchnikoff. His work in the Caucasus Mountains in the early 20th Century theorised that the unusual longevity of native villagers was due to a diet rich in live cultures, mainly obtained through drinking a fermented yoghurt drink called kefir.

Scientists from Spain hoped to modify the bacteria which are used to ferment cured sausage meat and in turn make them healthier. They specifically wanted to focus on obtaining live cultures of the Lactobacilli and Bifidobacteria generas which are commonly found in human faeces.

The scientists from Catalonia’s Institute of Food and Agricultural Research (IRTA), collected 43 faecal samples from healthy infants up to 6 months old. Infants of this age normally have much higher concentrations of Lactobacilli and Bifidobacteria present in their faeces. From the faeces the desired live cultures were identified, isolated and then, safely and cleanly, extracted to be cultured for inclusion in the sausage meat. This process eliminates the faeces and leaves the scientists with “pure” bacteria cells safe to eat.

The research team then tried fermenting six batches of sausages using three strains of bacteria found in baby poop, and another 3 strains from commercially available live cultures. The team used the bacteria in 'fuet' sausages, a typical Catalonian sausage similar to chorizo but without paprika.

For a sausage batch to be deemed successful the desired bacteria strains they had included in the curing process needed to become the main, dominant bacteria in the sausage. This only occurred in one of the batches, and it was a batch made with bacteria isolated from infant faeces. The bacteria in this batch thrived and grew “to levels of 100 million cells per gram of sausage enough to produce health-promoting effects to people.” Commented co-author of the study, Anna Jofré.

Concerned not only with making a healthier sausage, the research team wanted to ensure that their sausage would stand its own against regular fuet sausages in terms of taste. They employed professional tasters to sample their sausage along with regular fuet sausages. The professionals reported that the scientists’ batch tasted like regular fuet, even though it contained much lower salt and fat. Further research is planned to determine if the live cultures used have beneficial health effects.

Not sure you’re ready for Pooperoni? Don’t worry, you can find some more conventional foods containing live cultures in our blog post about fermented foods.