Could probiotics help with cystitis?

As a healthcare professional you are probably aware that cystitis is inflammation of the bladder typically caused by a bladder infection, making urination extremely painful. It mostly occurs in sexually active women; for some it is rare and for others it can happen several times a year. Symptoms include a frequent sensation of needing to pass urine even when little or no urine is present, blood in the urine, backache, lower abdominal pain, and nausea.

You may want to let patients know that they can help prevent cystitis by drinking plenty of water, taking cranberry supplements or sugar-free juice, wiping correctly after going to the toilet, and always urinating as soon as possible after sexual intercourse. Some women find that using condoms can help avoid infection. Keeping your middle warm, especially in cold weather, can also offer some protection - Kokoro sells traditional Japanese Harakame tummy wraps that support your core and provide a range of other health benefits. Short-term antibiotics are often prescribed for serious bouts of cystitis.

Although taking probiotics cannot cure cystitis, much evidence suggests that maintaining a healthy balance of beneficial microflora in the intestinal & vaginal passages can reduce the risk of UTIs (Urinary Tract Infections)1. To learn more about probiotics for UTIs, read the article Probiotics for UTI - A look at the research. Cystitis refers to inflammation of the bladder, usually caused by infection, whereas a UTI is an infection of any part of the urinary tract including the bladder (cystitis), ureters or urethra. UTIs like cystitis are caused by pathogenic bacteria such as E. coli. Treatments for UTIs are limited and many women who suffer with urinary tract issues seek other measures to support their intimate health. Ensuring a good level of probiotics in the gut can diminish the ability of pathogenic bacteria to bind, multiply and colonise, therefore leading to less chance of developing cystitis. This is partly why high volumes of water intake is recommended as both a prevention and a remedy for cystitis; because water flushes pathogens out of the system. Read on to find out more about which probiotics are helpful for cystitis.

Clinical trials have shown that a number of strains of Lactobacillus are particularly effective at helping to support vaginal health in those with female intimate health problems such as cystitis. A study2 showed that taking a probiotic containing various strains of Lactobacillus, amongst other interventions including cranberry tablets, resulted in significant health improvements and symptom relief. These specific strains (in particular, Lactobacillus rhamnosus GR-1® and Lactobacillus reuteri RC-14®) have been clinically trialled to survive transit through the gut, and then successfully colonise the vagina and bladder where they exert their beneficial effects3. In a large clinical trial4 involving 252 post-menopausal women, it was found that after a period of twelve months, the occurrence of UTIs was reduced by 50% in the women who were given a combination of the above two strains. This was equally as effective as antibiotic treatment, but in those who were treated with antibiotics there was also a 90% rate of antibiotic resistance. This demonstrates that specific probiotics could perform to the same standard as antibiotics, without the risk of pathogens developing resistance. 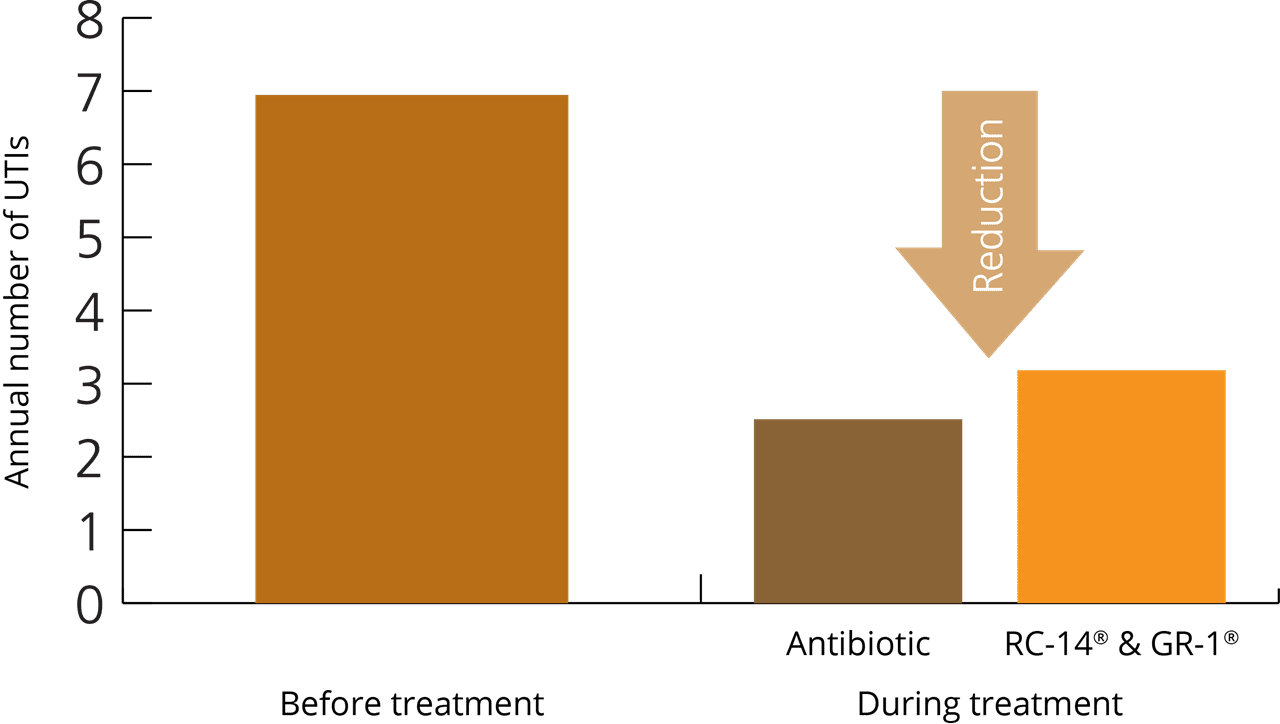 Read more about the research behind these strains on the Probiotics Database.