Trimethylaminuria (abbreviated to TMAU and also known as ‘fish odour syndrome’) is a very distressing condition that often seriously affects the quality of life and confidence of sufferers. It is a metabolic condition, in which sufferers are unable to break down Trimethylamine (TMA) which is itself an end product of the bacterial breakdown of certain dietary compounds such as: choline, carnitine and lecithin, found in various foods, such as milk, red meat, eggs, liver, peas, beans and soy products. Due to the fact that gut bacteria are involved in the conversion of dietary compounds to TMA1, this blog will consider whether probiotics could play a role in the management of symptoms of Trimethylaminuria (TMAU).

Ordinarily Trimethylamine (which has a fishy smell) is converted to Trimethylamine N-oxide (which is odourless) via the action of an enzyme called ‘Flavin containing mono-oxygenase 3’ enzyme or FMO3. This enzyme, which is produced in the liver, is faulty in people with TMAU, and as such Trimethylamine builds up in their bodies and results in a very pungent odour, that is released in their sweat, breath, reproductive fluids and urine.

Whilst the condition is often referred to as ‘fish odour syndrome’ the smell can actually vary greatly from person to person, and ranges from very fishy to garbage-like and even faecal in others. The odour can either be constant, or fluctuate, with female sufferers often reporting a worsening of odour around their menstrual periods.

There are two types of TMAU1:

There is no current cure for TMAU, but sufferers can make dietary and supplement changes that often improve their situation dramatically. According to the UK TMAU support group, following a choline free diet and limiting protein consumption often brings significant reduction in odour for people with the condition.

There are no official guidelines on which natural health supplements to take, but many of the online forums speak of patients experiencing relief from one or other natural remedies. The most commonly mentioned are: activated charcoal tablets, Vitamin B2 (riboflavin), copper chlorophyllin and probiotics.

Whilst there is currently no clinical research proving that probiotics are effective in TMAU, the reasoning behind supplementing with them seems sound. The bacteria in our gut play a vital role in helping us break down and digest our food. As a general rule of thumb the friendly strains of bacteria produce non-smelly substances as an end product of their fermentation process, whereas pathogenic microbes often produce more 'noxious' ones. Importantly for TMAU sufferers, it is NOT the friendly strains of bacteria in the gut that break down and convert choline and other substances from the diet in to TMA. The major bacterial converters of choline, carnitine and lecithin are mostly neutral, pathogenic or opportunistic microbes.

So, it is thought that probiotics could potentially help in two ways. They can control the populations of pathogenic and opportunistic bacteria so that less TMA is released from the choline in our food. Secondly, they can help reduce transit time2, again, so that there is less time for TMA to be released from food and then absorbed in to the blood stream.

To read more about improving regularity and reducing transit time, you may wish to read our earlier blog post about one of the clinical trials on the strain Bifidobacterium lactis BB-12®.

This strain of bacteria can be found in Optibac Bifido & Fibre. 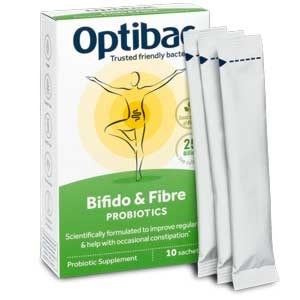 One fascinating study that has been done in humans investigated the use of faecal microbial transplant (FMT) in TMAU sufferers. FMT involves transplanting faecal matter from a healthy (carefully screened!) donor into the GI tract of the recipient. This allows for a huge transfer of microbes that can not currently be replicated by simply taking probiotic supplements.

The study in question3 used FMT treatment on two individuals affected with TMAU. The patients first received a pre-treatment with the antibiotic metronidazole, and were subsequently given FMT. Interestingly, one of the patients saw a significant decrease in ﬁsh odour during the ﬁrst 6 months. However, perceived odour returned to baseline after one year, suggesting that recurrent treatment would be necessary.

Whilst this was only a very small scale study, the results showed some promise, and indicate the potential importance of the gut microbiome for the management of this distressing condition. Hopefully these initial insights gained will provide researchers with an avenue for further and deeper investigation.