Lactobacillus paracasei CASEI 431® is a food supplement with research demonstrating its safety and survival to reach the gut alive. In a study by Vlieger, A. et al., in 2009 it was given in combination with B. lactis BB-12® to children for three months to assess safety and tolerability. Measurements across a variety of parameters such as growth, behaviour, infections, antibiotic use, visits to the general practitioner, stool characteristics and number of adverse events were compared to the control group, and the results confirmed these strains to be safe and well tolerated.

Upper Respiratory Tract Infection (URTI) is the most common illness for which patients seek medical advice and care, and conventional treatment is typically with antibiotics. This type of medication may result in unpleasant side effects, and there is a growing issue of antibiotic resistance in some pathogens; consequently, there is an ongoing quest to find safe and effective adjuncts and alternatives for prevention and resolution of symptoms.

Studying immune function is complicated primarily due to the fact that people don’t catch a cold or flu at the same time and therefore in order to study immune function you need to find a way of stimulating the immune system to react to something. The vaccine challenge model, however, is a recognised and accepted method of studying the immune response. A vaccine study is a research model whereby the body is exposed to a fragment of infection, as a way of observing the body’s immune response to it. Vaccine studies are considered the best study design for investigating the effects that a control substance (e.g. probiotic or placebo) has on immune function. This is because it is generally quite difficult to test an immune reaction in someone who is not ill, but only testing people who are already ill does not accurately represent the general population; therefore it becomes difficult to generalise the findings and relate these to the average person. Vaccine studies allow us to see how a ‘healthy’ person’s immune system reacts to an infection and how the probiotic influences its response. This model was used in the largest ever clinical study conducted to study the effects of probiotics on immunity.

This randomised, placebo-controlled and double-blind study used a total of 1104 healthy participants, who were randomly allocated into two groups: a probiotic group and a placebo group. After a two week wash-out period to ensure that no previous probiotic intake was still active, those allocated to the probiotic group were given an acidified milk containing one billion CFU of the probiotic strain Lactobacillus paracasei CASEI 431®. Those in the placebo group were given a milk which looked and tasted the same but which did not contain a probiotic. Both groups consumed their milk supplement once daily for 6 weeks, but to assess the effects of the probiotic supplement on immune function, all subjects were also given an influenza injection 3 weeks into the study. The effects of the vaccine were measured by serum and saliva testing. Participants were also asked to record data daily using the Wisconsin Upper Respiratory Symptom Survey (WURSS) in a diary, throughout the 6 week intervention period and until a 9 week follow up appointment was conducted.

The results showed that L. paracasei CASEI 431® reduced the duration of flu-like symptoms by 3 days compared to placebo (duration reduced by 41%). In other words, participants in the probiotic group experienced symptoms for a significantly reduced amount of time compared to those without probiotic supplementation. This would, therefore, suggest that the potential effect exerted by the L. paracasei CASEI 431® probiotic strain could be detected by using other measures or biomarkers of the immune system.

In another gold standard trial by Rizzardini et al., (2012), the influenza vaccine was again used to test the potential of L. paracasei CASEI 431® to enhance immunity. In this randomised, double-blind, placebo-controlled study, 211 healthy participants were divided into four groups and given either one billion CFU of the probiotic strain Bifidobacterium lactis BB-12® (capsule format), or Lactobacillus paracasei CASEI 431® (milk drink format). The placebo groups were given corresponding placebos in similar formats. The intervention period was for 6 weeks, with an influenza vaccine being given in the second week. Plasma and saliva samples were taken, both at baseline and again after six weeks, in order to analyse cytokines, antibodies and innate immune markers. The results showed that IgG increased by 37% in the Lactobacillus paracasei CASEI 431® group and slgA significantly increased in this group compared to the placebo.

Lactobacillus paracasei CASEI 431® and Immunity and Support during Antibiotic Treatment

Disruption to the gut microflora is a known effect of antibiotic therapy and is believed that, due to the interaction between the human microbiome and the immune system, any disturbance to these populations of resident bacteria may compromise immune function. For this reason, research into the protective effects of probiotics against antibiotic-related gut dysbiosis has been explored to see if supplementation with probiotic supplements could offer some support for immune function in this scenario.

In order to try and demonstrate this effect, a double-blind controlled clinical trial was conducted using pediatric patients who were receiving antibiotic therapy with am***cillin and clavulanic acid. An intervention group was treated with an oral probiotic preparation composed of Lactobacillus paracasei ssp. paracasei CNL-431®, Bifidobacterium lactis BB-12®, Streptococcus thermophilus TH-4 and a prebiotic fructooligosaccharide (FOS), both during and for 30 days after the 7 day antibiotic therapy. The other group received an antibiotic and placebo supplement administered under the same regimen as the probiotic.

In the probiotic group, levels of salivary secretory IgA (sIgA) were maintained in the probiotic group, and intestinal populations of probiotic bacteria increased. Secretory IgA (SIgA) is an immunoglobulin that acts as the first line of defence in protecting the intestinal epithelium from toxins and pathogenic microorganisms, and it was noted that in patients from the placebo group, sIgA levels initially decreased after antibiotic therapy. The study authors concluded that a probiotic supplement may offer some immune support during antibiotic therapy (Valsecchi C. et al., 2014). 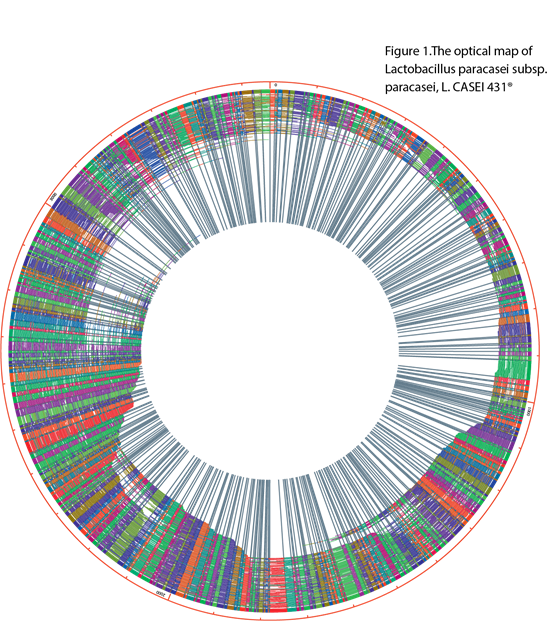 Lactobacillus paracasei CASEI 431® and Gastrointestinal Function in Children and Adults

A randomised, double-blind, placebo-controlled study looked at the effect of an infant formula, fortified with both prebiotics and probiotics, on gastrointestinal function in children. A total of 126 new-born infants were divided into groups with the children in the test group receiving a combination of the strains Bifidobacterium lactis BB-12® and Lactobacillus paracasei CASEI 431®. The placebo group received the same formula but without the probiotics added. A total of 80 infants aged 6 months completed the study. No differences in growth, infections or crying hours were detected; however, those infants taking the probiotics had softer and more frequent stools for the first 3 months (Vleigar A. et al., 2009).

Some encouraging results for functional constipation symptoms were noted in another randomised, double-blind study conducted using a group of otherwise healthy women with delayed intestinal transit time (ITT). A total of 102 women were randomised to receive a plain yoghurt or a yoghurt containing Bifidobacterium lactis BB-12®, Lactobacillus paracasei CASEI 431® and fibre. 83 women completed the study, and the most significant positive results were observed in those women who typically experienced an ITT of more than 48 hours, where transit time was decreased by 40.9%. Stabilisation of lactic microflora was also significantly higher in the probiotic group (Malpeli A. et al., 2012).

Diarrhoea is a common yet debilitating digestive symptom, which can be particularly serious for young children. Probiotics are being researched as a natural adjunct to conventional treatments.

A double-blind, placebo-controlled trial studied 93 children aged between 6-24 months who were suffering from persistent diarrhoea symptoms. The children were randomised into 3 groups, in which they each received a cow’s milk with an added probiotic, which comprised either a combination of Lactobacillus paracasei CASEI 431® and Lactobacillus acidophilus CRL730 or Saccharomyces boulardii. The probiotic milks were given to the children twice daily for five days. The results showed that compared to the placebo group, both probiotic groups significantly improved their diarrhoea symptoms in terms of frequency of stools. Additionally, after the 5 day intervention period, it was found that 90% of the Lactobacilli groups and 83% of the Saccharomyces boulardii group had completely recovered, compared to only 10% in the placebo group (Gaon et al., 2003).

An earlier trial also used milk fermented with a mixture of Lactobacillus paracasei 431® and a strain of Lactobacillus acidophilus, which was given to children who had been hospitalised with infantile diarrhoea due to post-gastroenteritis syndrome. A total of 13 children aged between 6-24 months were given the fermented milk at 6 hourly intervals for 7 days. There was no control in this study as all of the children were resistant to conventional treatment. The results were encouraging, as the probiotic intervention was effective in eliminating symptoms of diarrhoea after 4 days in 11 of the 13 children (Gonzalez, et al., 1994).

Dairy intolerance is a common food intolerance most commonly caused by a deficiency of the enzyme lactase. Lactase breaks down lactose, the sugar in milk products, into simpler molecular forms which can then be absorbed into the bloodstream. Certain probiotic strains ferment lactose and so may act like lactase, so the use of probiotics to help with lactose intolerance is a growing area of research.

To demonstrate this effect, Lactobacillus paracasei CASEI 431® was tested alongside strains of L. acidophilus in a fermented milk, to see if the probiotic-infused milk would be better tolerated than normal milk. The trial observed 18 people with lactase deficiency and lactose intolerance, with the hydrogen (H2) breath test being used to measure their level of lactose intolerance (hydrogen gas is produced when undigested lactose in the colon is fermented by bacteria). For the purposes of the study, 12 control subjects without lactose intolerance were also studied. It was found that the measurement of H2 exhaled from those using the fermented milk was statistically less than those consuming standard, non-fermented milk. Additionally, the fermented milk slowed down faecal transit time in the participants – diarrhoea is a common symptom of lactose intolerance. Clinical symptoms were also evaluated and it was found that other common symptoms of bloating and abdominal colic were also reduced (Gaon, et al., 1995).

As some properties & benefits of probiotics may be strain-specific, this database provides even more detailed information at strain level. Read more about the strains that we have included from this genus below.

For more information and the latest research on probiotics, please visit the Probiotic Professionals pages.

Valsecchi C. et al., (2014), ‘Evaluation of the effects of a probiotic supplementation with respect to placebo on intestinal microflora and secretory IgA production, during antibiotic therapy in children affected by recurrent airway infections and skin symptoms’. Journal of Biological Regulators & Homeostatic Agents, 28(1):117-124.

Vleiger A., (2009), ‘Tolerance and safety of Lactobacillus paracasei ssp. paracasei in combination with Bifidobacterium animalis ssp. lactis in a prebiotic-containing infant formula: a randomised controlled trial’. British Journal of Nutrition,102:869-875.