Constipation in the elderly, like in the young, can be caused by a diet lacking in fibre, or a low fluid intake, lack of movement or exercise, and sometimes by emotional stress. Often medications such as antacids, tablets for high blood pressure, antidepressants and some pain killers can also upset the digestive system.

When you are eating less food than you used to do, and maybe drinking less fluid than before, your bowel movements will slow down. When stools remain in the large intestine for long periods, they can dry out and become hard, making them more difficult to pass. If you have less than three bowel movements a week, or have to strain when going, this could indicate you are suffering from constipation. 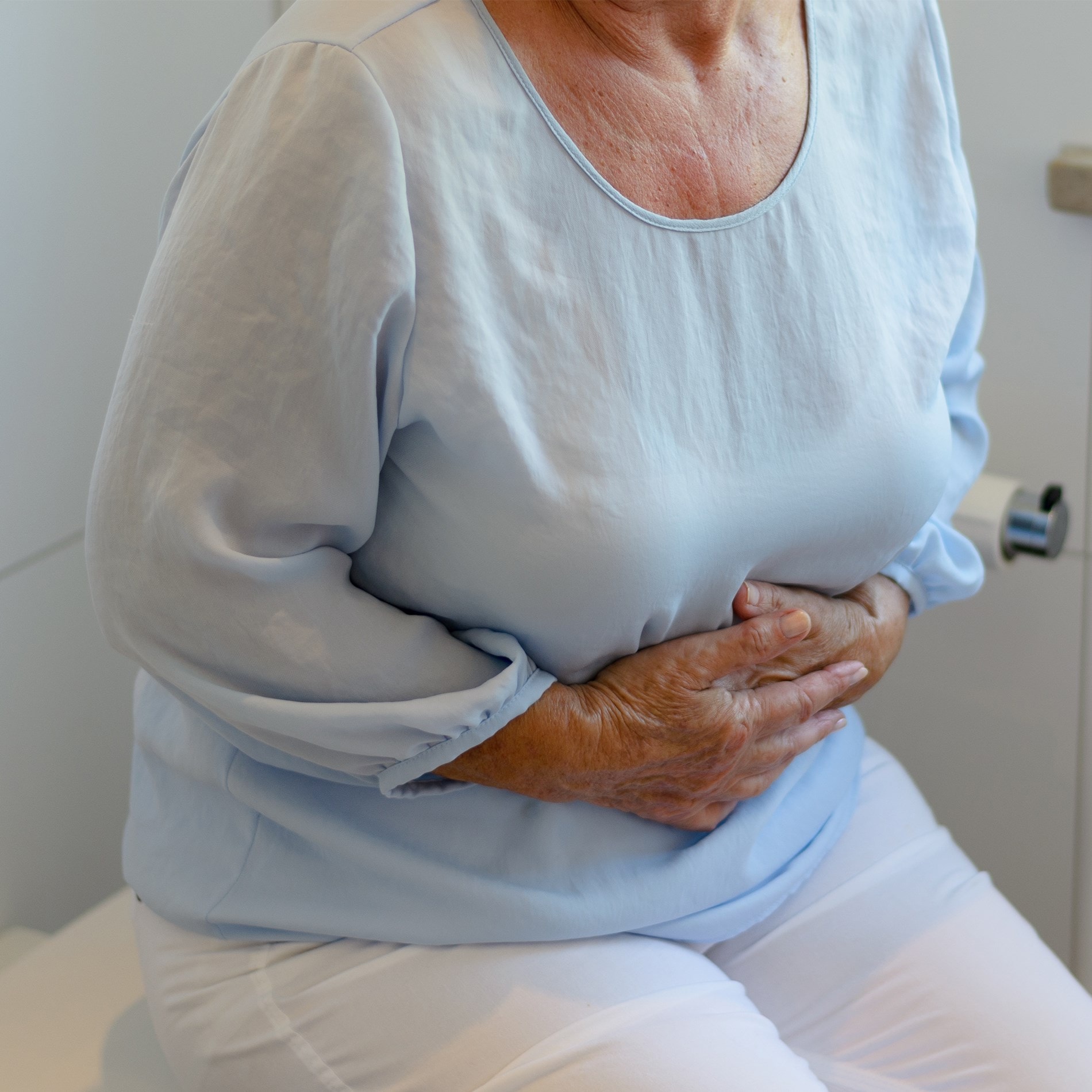 A healthy bowel needs a variety of foods to remain efficient and trouble-free. These days you may choose to have simple foods at mealtimes that don’t require too much time and effort on preparation and cooking. In doing this though you might be missing out on some particular foods or ingredients that keep the bowel working well.

Eating a regular, balanced diet is one of the most important things you can do, ensuring that you are getting enough fibre or roughage whether you are elderly, middle-aged, or still young and full of beans, so to speak!

Fibre is essential for bowel regularity and the prevention of constipation. You can get dietary fibre from wholemeal flour, vegetables, fruit and bran cereals. Non-fibre foods are digested quickly in the stomach and small intestine, but fibre gets to the large intestine where it stimulates the movement of stools, and also attracts water to keep stools soft and bulky.

Try to follow the five portions of fruit and vegetables a day rule if possible. You can try the traditional remedies of eating foods known to have a laxative effect such as prunes or rhubarb, and herbs such as parsley and elder berry, but they don't necessarily work for everybody.

It's vital that you make sure you are drinking enough fluid throughout the day, which helps to lubricate the passage of food and prevent it drying out along the way and causing constipation. The recommendation (unless you are fluid restricted) is to drink at least 1.5 litres of water a day, and 2 litres if you are eating a high-fibre diet. Get into the habit of drinking little and often, and not all in one go. Fruit juices are good because they can have a laxative effect, particularly prune, pear and apple juice. Drinking a glass of warm water each morning can also help, and you can add lemon if you wish.

During later years it's likely that we won't be exercising as much as before. Maybe we are also sitting for longer periods of time and not getting out as much.

Also, muscle tone will not be as strong as it used to be, and bowel movements depend on good muscular contractions. Exercise really does benefit the digestive process, in the elderly and for everyone; because it stimulates the passage of food through the system (via strengthening peristalsis), thereby helping to prevent constipation. Regular walks and getting out in the fresh air, or even movement around the house and garden is good for digestion, as well as for your general health and wellbeing.

Any change to your normal environment or alterations to familiar routines can upset your digestion and cause a variety of health issues including constipation or diarrhoea. Even going on holiday can disrupt normal bowel habits, especially if different or exotic foods are eaten, and unfamiliar bacteria are experienced. This is a time to concentrate in particular, on the advice about diet, fluids and exercise.

The levels of mobility we have in our elderly years can vary hugely from person to person. Some might have difficulty getting about, and possibly even need to use a wheelchair. You might not go to the toilet when nature calls as quickly as you used to and put the urge off for a period of time. Others don't like to go to the toilet when they are out, and will avoid the use of public toilets, preferring to wait until they are back home.

Putting off our ‘natural urges’ might not seem important, but it can be a cause of constipation, because waste matter is continually being collected ready for evacuation. It becomes drier and harder the longer it’s kept waiting, and therefore more difficult and potentially painful to pass when you do go. Try to go to the toilet at the earliest possible convenience, and this piece of advice applies for both bowel movements and passing urine.

The first thing most people think about when looking to alleviate constipation is taking a laxative, and there are many different types to choose from. On the shelves at the pharmacy or supermarket you will find stimulant laxatives which encourage intestinal muscle movement; bulk-forming laxatives that help to retain moisture in the bowel; stool softeners, and others which prevent stools from drying out and becoming hard.

Like many medicines, laxatives can commonly have some side effects such as wind and stomach cramps, and if you take more than is advised, you might then get diarrhoea. It’s not a good idea to use laxatives for more than a couple of weeks, because they can aggravate the large intestine over time. Reliance on them in the long-term for fear of suffering with chronic constipation should definitely be avoided as laxatives are habit-forming. The bowel begins to depend on them, and natural mechanisms fail to work without the help of drugs.

You could try a more natural solution, using herbal remedies such as Barberry capsules, or Ayurvedic remedies like Triphala. You may also have heard about probiotics. Probiotic supplements are a natural way to help keep the bowels regular and the digestive process healthy by adding to the friendly bacteria in the gut.

It is worth noting that there are particular strains of bacteria that have been widely studied and shown to have specific benefits of helping with sluggish bowels. One example of this is the strain Bifidobacteria lactis BB-12®, which has been extensively trialled, and shown to be beneficial, for regular bowel movements.

You can find this strain in Optibac Probiotics Bifido & Fibre.

If, after making some small changes to your diet and lifestyle your regularity shows no sign of improving, or you initially have any other symptoms alongside such as nausea, a painful abdomen, blood in your stools or you are losing weight, then it is important to consult your doctor. This is to rule out anything more serious and other underlying causes.

Can constipation weaken your immune system?