In today’s modern world where they are under constant assault by processed, sugary foods and antibiotics, our friendly bacteria can do with all of the support they can get. We know that eating foods containing natural prebiotic substances, such as onions and leeks, can help to feed our friendly flora, but what else can your patients do to give their gut bacteria some help to flourish?

Well, according to a study1 hot off the press in the journal ‘Lipid Technology’, Omega-3 fatty acids were shown to promote the growth of commensal bacteria in the colon. The colon is home to the large majority of bacteria in the intestines, and in general, commensal strains are thought to benefit their host in a variety of ways, in return for their ‘bed and board.’ The intestines may also provide a home for undesirable bacteria if conditions are right for their survival, so ideally it's better to crowd out these villains with hosts of beneficial species.

During in-vitro experiments using human gut cells, this latest study initially determined that there was a difference in the way that the intestinal cells responded to pathogenic and probiotic bacteria.The laboratory tests replicated the intestinal environment using layers of colorectal cells over a permeable compartment containing immune cells, which was meant to simulate the lamina propria.

The commensal bacteria, in particular the species Lactobacillus gasseri, appeared to communicate with the gut cells and encourage them to produce more Transforming growth factor beta 1 (TGF-β1), a protein that allows the beneficial strains to be tolerated within the intestinal environment. Examination of two typical pathogenic species, Escherichia coli and Staphylococcus aureus, suggested that they did not appear to have this ability.

“L. gasseri increased the secretion of the immune signalling protein TGF-β1 (Transforming Growth Factor β1), along with increased expression of its encoding gene signal. TGF-β1 has an important role in promoting tolerance towards commensal bacteria and has a role in dampening immune responses following inflammation” said the study.

So where do Omega-3 oils fit into this probiotic picture?

The research team wanted to assess whether these ‘gut reactions’ could be affected by poly-unsaturated fatty acids (PUFAs), and so they tested three different types of PUFAs: eicosapentaenoic acid (EPA), docosahexaenoic acid (DHA) and arachidonic acid (AA). No significant effects were found from the DHA or AA, but the presence of eicosapentaenoic acid (EPA), already well-known for its anti-inflammatory properties and positive cardiovascular benefits, was found to further increase the production of TGF-β1 and encourage the growth of commensal bacteria. This marriage has exciting potential for the promotion of good gut health and the management of inflammatory and autoimmune conditions.

“This early research shows the potential of combining fish oil with probiotic bacteria to promote probiotic survival in the gut and/or dampening inflammatory responses” commented the researchers. 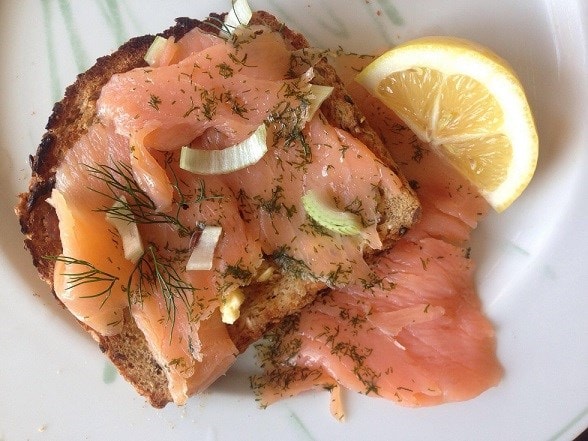 The most common dietary sources of EPA are fatty fish such as salmon (above) and mackerel, but there are a few vegan sources including seaweed and algae, though due to limited availability these are most commonly available as dietary supplements. Vegetarians and vegans can also source their Omega-3 fatty acids from plant foods such as flax and chia seeds in the form of Alpha-linolenic acid (ALA), a precursor to EPA, but it’s worth bearing in mind that effective conversion of ALA to EPA is not always reliable.

This latest research study was led by The New Zealand Institute of Plant and Food Research and the Institute of Food Research in Norfolk – the same place that has developed the Beneforte ‘Superbroccoli’. (As an aside, my mum took part in the Beneforte trials – she had to eat a LOT of broccoli! Good job she is a big fan of this nutrient-packed vegetable, which has also been shown to be synergistically linked to probiotics. A 2010 study2 indicated that consuming probiotic bacteria with broccoli could help to enhance absorption of its bioactive anticancer agent, sulforaphane).

You can find these three strains in Optibac 'For your cholesterol'.