A brand new study1 has brought to light the astonishing fact that the intestinal microbiome (the microorganisms living in the gut) of gout patients, is highly distinct from the intestinal microbiome of healthy individuals. Traditionally gout has been diagnosed using a blood test. However, this study raises the suggestion that intestinal bacteria could become a major diagnostic criteria for gout, and may even be more accurate. To learn more, read the article: The microbiome - all you need to know. 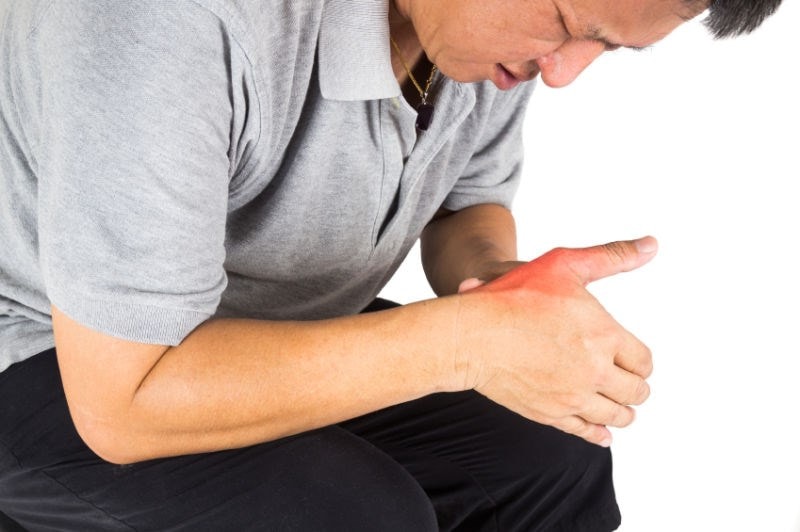 Gout is a painful condition affecting the joints

So what is gout?

Gout is a very uncomfortable, essentially inflammatory condition, which can cause an attack of sudden burning pain, stiffness and swelling in the joints. This can go on to be harmful for your joints and tendons if left untreated. Fundamentally, gout is caused by a disorder in purine metabolism. Purines are found in many foods we eat, and when broken down get turned into uric acid. This uric acid is usually efficiently excreted so doesn't cause a problem. However, when uric acid is not expelled properly the levels of it become high in the blood stream resulting in it being deposited as uric acid salt crystals in joints and surrounding areas, which in turn can lead to excruciating joint pain.

Presently the two symptoms - high uric acid levels in the blood, and joint pain due to deposits of uric acid salts, are the two main clinical diagnostic criteria used when deciding if a patient has gout or not. However, according to this study, the uric acid levels index which is used when diagnosing is not accurate, and in fact, using blood samples isn't really sensitive enough to accurately ascertain the presence of gout. This is because, as described in this research article, gout patients are largely in a stressed state. When someone is stressed the body produces the adrenocorticotrophic hormone. This hormone actually stimulates the excretion of uric acid, so in fact there will be no significant rise of uric acid in the blood stream for most early-onset gout patients. Hence gout can often be left undiagnosed for a while.

So how does this study fit into this picture?

Uric acid is known to be excreted in two ways. 70% is excreted through the kidney, and 30% is excreted by the intestine. Intestinal bacteria are known to have a large role in the metabolism of purine and uric acid. Targeted enzymes are excreted by particular bacteria, which in turn break down the uric acid. It was found that enzymes known to break down uric acid, were particularly prevalent in those with high populations of Lactobacillus and Pseudomonas.2 This led the researchers to question whether this could be used as a way of diagnosing gout, or even giving a prognosis.

To test this idea, the study looked at the intestinal bacteria of 33 gout patients and 33 healthy individuals of an 83 member Chinese cohort. The taxonomic structure (used to classify organisms) of the bacteria was determined using a gene sequencing technique, and in doing so they were able to put together a ‘functional profile’ of the corresponding microbiome. What they discovered, was that the ‘microbial taxonomic and functional features’, i.e the type of bacteria, were ‘profoundly different’ between gout and healthy individuals. In fact once they established a microbial model on which to test subjects, they could diagnose gout with 88.9% accuracy. It was also found that those who could not be accurately diagnosed using the traditional blood sample method, could be diagnosed using this microbial model.

The bacteria Bacteroides caccae has been linked to gout and IBD.

Interestingly, the researchers also looked into the correlation between the microbiota prevalent in gout patients, and those that had already been found to be prevalent in the guts of patients with other metabolic diseases. It was found, for example, that Bacteroides caccae were enriched in gout patients but had also previously been recognised as a biomarker of Inflammatory Bowel Disease (IBD)3. Therefore the increased level of this bacteria in gout patients could also potentially lead to an inflammatory response. Additionally it was noted that there was significantly less presence of the bacteria Faecalibacterium prausnitzii in gout patients. This particular bacterium is noted for its butyrate production. Butyrate is a short chain fatty acid that protects the gut in many ways, such as by providing nutrition for the intestinal mucosa, enhancing intestinal immunity, promoting growth and repair of the villi on the gut wall, and also helping to keep the gut bacteria in balance. Its overall effect is very anti–inflammatory, and significant for gut health. Interestingly it has been reported that this bacteria Faecalibacterium prausnitzii, is found in distinctly reduced numbers, not only in gout patients, but also in those with liver cirrhosis and Type 2 diabetes. This suggests that the Faecalibacterium prausnitzii could become an indicator of intestinal health and associated diseases.

This study therefore suggests that it now may be very important to consider your gut microbiota when coping with gout. Although more research is needed in this area, this is also not the first study to make the exciting suggestion that a catalogue of genes in the human gut microbiome, could become crucial for the analysis, diagnosis and prognosis of many more diseases.

The gut microbiome composition can be positively influenced by the introduction of friendly bacteria through taking a high quality, well researched probiotic supplement. This may be worth considering to encourage a healthy balanced microbiome for overall health and wellbeing.