It is quite a common occurrence for parents to clean their baby’s dummy by sucking on it - and recent research has found that this simple act may actually help to prevent childhood asthma and eczema. Read on to find out more.

The study began with the initial recruitment of 184 pregnant women at the Queen Silvia Children's Hospital in Gothenburg. Once the infants were born, the researchers followed the families for three years. The infants in the study were deemed particularly prone to develop allergies, as around 80 per cent of them had at least one parent who had some form of allergy. At around six months, 65 of the parents said that they cleaned their infant’s dummies by sucking on them (whereas the other parents mentioned they cleaned the dummies with tap water or by boiling them). 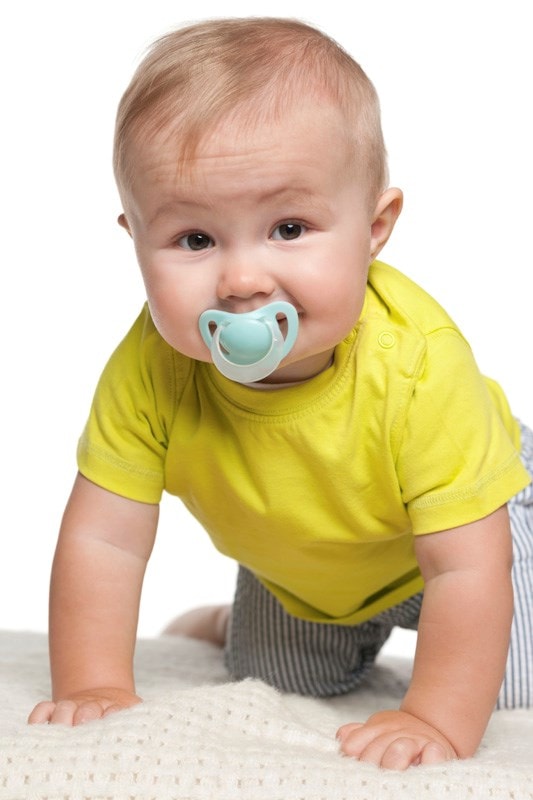 Don't spit the dummy, suck the dummy! It may help prevent childhood eczema.

At 18 months, the children were tested for allergies, with 46 of them suffering from eczema and 10 having symptoms of asthma. Interestingly, the children of the dummy sucking parents were 63 per cent less likely to experience eczema, and were a whopping 88 per cent less likely to have asthma when compared to the children of parents who did not report using this cleaning technique. At three years, the difference in asthma between the groups had disappeared, although a 49 per cent reduction in eczema still existed between the groups in favour of the dummy sucking group.

A more in-depth analysis of 33 of the babies found that the infants whose parents sucked on their dummies, had different types of bacteria when compared to the other group that did not use this cleaning practice. This early exposure to different bacteria may be possibly responsible for immune stimulation (which may have a positive effect on allergy in the dummy sucking group).

The results of this study are obviously quite interesting but the researchers did note that parent characteristics other than their tendency to suck the dummies of their children, may have contributed to the differences in allergy risk between the groups. Factors such as spending more time with their children, having more direct contact with their babies or having a more relaxed attitude towards over-cleanliness may also be contributing to the allergy risk outcomes. Future research that randomly assigns parents to either use the technique consistently or not at all - could likely paint a more accurate picture of how dummy sucking techniques may positively influence childhood allergy risk. Watch this space!

Healthcare practitioners can visit our Professionals site to find out more about probiotics and eczema.