The subject of the vaginal microflora, and how it might alter during pregnancy has been given significant attention in recent years by the scientific community.

We know the vaginal microbiome is ordinarily dominated by a number of genus, including Lactobacilli. If balanced, these bacteria provide a natural barrier against bacterial and viral pathogens and help to maintain a healthy vaginal pH.

We also know that once a woman falls pregnant, and as the pregnancy progresses, the vaginal microflora undergoes a series of fascinating changes.

At the beginning and towards the middle of gestation the bacterial composition becomes less diverse, in favour of Lactobacilli bacteria.1 This is thought to be a deliberate mechanism for limiting intimate infections, which can cause complications during pregnancy.2

It’s been suggested that these changes are triggered by hormonal changes and that the consequent migration of Bifidobacteria to the vaginal tract from the gut is a deliberate ‘gathering’ of bacteria in preparation for birth.

You might remember that in 2014 Joanna wrote a blog post highlighting a documentary film, Microbirth, which investigated the link between a natural birth and a mothers microbiome, and how these impact on health and immunity.

She explored the idea that bacteria gather in the mother’s vaginal tract pre-birth and that the new-born is ‘seeded’ during the birthing process with the mother’s microbiome – a process the programme-makers referred to as ‘maternal heritage’.

How an individual is born, whether via vaginal delivery or C-section, has the potential to affect that person’s lifelong microbiome. Interestingly, in a recent interview, Dr Aagaard, from the Texas Children’s Hospital and Baylor College of Medicine in Houston, argued that as much attention needs to paid to influencing the developing microbiome of the baby, in the 40 weeks of pregnancy, as to the transfer of microbes dring the birth itself – ‘as this may be as important or even more important than how the baby comes out’.3

For a long time, it was thought that the womb was sterile but we now know that the placenta also harbours a unique ecosystem of bacteria from the mother. It follows that this bacteria is passed to the baby via the blood, and although Dr. Aagaard is sceptical that this was an evolutionary design, she agreed that this knowledge could be used to our advantage, potentially in preparing the fetal immune system.

Although more research is needed, these studies support the message that throughout pregnancy, during labour and beyond, the mothers gut and vaginal microflora are hugely relevant to both her own health, and that of her baby.

If you are looking for a probiotic supplement safe to take during pregnancy, you may like to consider Optibac Pregnancy. 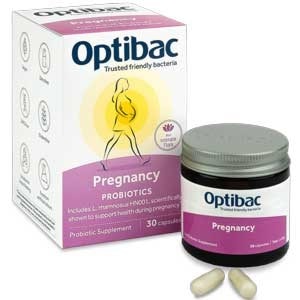 If you'd like to learn more about bacteria and the placenta you can read Kathy's excellent blog: 'Do babies come into contact with bacteria in the womb?'.