Over the years, our resident bacteria have established a status of supposedly outnumbering our body cells by a ratio of ten to one. Those who found this a rather alarming statistic need fear no longer. A new study from Israel and Canada suggests that this ratio was in fact not entirely correct. It is now suggested that this ratio is more likely to be one to one.

Ron Milo and Ron Sender1 at the Weizmann Institute of Science in Rehovot, Israel, and Shai Fuchs at the Hospital for Sick Children in Toronto, Canada were intrigued by the figures mainly established in a report by an eminent microbiologist Dwayne Savage2 in 1977. This report concluded that the human body was made up of 10 times more bacteria than human cells. Milo and team felt that these figures were not based on substantial statistics so embarked on trying to make these figures more accurate. They trawled through as many studies that had tried to accurately measure number of cells in different tissues in the body, as well as in stool samples, as possible. They then worked on the statistics of all these results. The total they calculated was around 39 trillion microbes and 30 trillion human cells. Almost equal!

In fact they stated in their report that “The numbers are similar enough that each defecation event may flip the ratio to favour human cells over bacteria”. It’s an amusing thought that with every toilet visit, we take control over the bacterial influence before they rapidly reproduce again. However, bearing in mind the array of important functions these bacteria have, maybe this illustrates a case for all the more reason to be looking after our exposure to bacteria! After all the diversity of our microbiome is deemed to be important for many health reasons.

It may simply be of interest to note that the largest quantity of cells in our body are actually red blood cells. These do not contain DNA, so some may argue they are not of the same importance as bacteria. As you can see from the graph below, despite the fact that there are many more red blood cells than other types of cell, the actual mass of these is negligible compared to that of say muscle cells which barely show when looking at numbers. 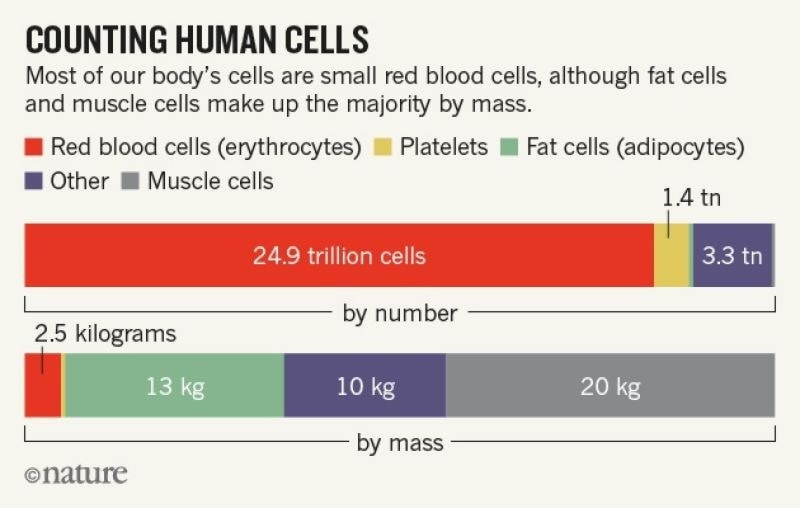 This illustrates to me, that despite being important and fascinating, collecting and comparing data like this can be subjective. Is it the number that matters? The mass of cells or the genetic influence?

As asked by the researchers themselves:

“Should we care about the absolute number of human cells in the body or the ratio of bacterial to human cells? .... we think that updating the ratio of bacteria to human cells from 10:1 or 100:1 to closer to 1:1 does not take away from the biological importance of the microbiota. Yet, we are convinced that a number widely stated should be based on the best available data, serving to keep the quantitative biological discourse rigorous.”

It's curious that this most recent estimate can be so different to the one previously quoted. Does using old, existing data make this new estimate accurate, and up to date? Additionally, although this paper does look at some of the variations possible when counting bacteria and cells in humans, such as male vs. female, or the difference obesity could possibly make to the number of bacteria compared to their slimmer counterparts, the authors conclude that this wouldn't change the ratio much. However, can this study take into account the possible difference between bacteria levels in people on certain diets, medications, or even environment? Is it even possible to get a truly accurate and consistent ratio count of bacteria vs body cells?

It might be interesting to question the point Milo raises that he feels that the number of bacteria historically counted in the faeces, and estimated in the colon, was hugely over estimated. Is Milo correct that that 10:1 figure was an overestimate, or could it even be that the 10:1 figure was correct at the time, and 1:1 figure is correct now? Could his new calculation actually back up research suggesting that the number of our resident gut bacteria are actually diminishing? The idea that our microbiome is becoming less diverse, and much smaller in number is becoming established. Research is also suggesting that this diminishing number of bacteria may be correlating negatively with the state our health. If this is the case, could it not be that the ratio quoted of bacteria to body cells may be an ever evolving one, as indeed our bodies and health are, due to the changing environment and lifestyle we live in?

Secondly, according to Milo, the ratio is now so equal, that not only defecation may tip it temporarily into a negative ratio, but he also suggests that certain illnesses or influences may further diminish our bacteria. Knowing what we do about the importance of our bacteria to our health, this is possibly concerning. Whereas, with a high ratio of bacteria to body cells, we could have afforded to be complacent about loss of bacteria, maybe this study is a reminder to continue to embrace ways in which to keep a good balance of probiotic bacteria in our body.